skip to main | skip to sidebar

Narcoviolence, cynicism and abandonment of the underclass Today, the three North American amigos are meeting in Guadalajara to review common concerns. The list is long — an economic crisis, border security, competitiveness, climate, migration and the drug trade narcoviolence. Most observers understand that most of these issues must be resolved by all three countries working jointly in a cooperative framework— few would question joint strategies targeting the economy, climate and migration. But, unlike those issues, there are many who continue to believe that combatting narco violence is endemic to Mexico and uniquely the product of conditions within Mexico. Two op-ed pieces published this weekend reminded me that all social problems — including narcoviolence—are linked to broader trends and social change is not constrained within borders. Today, Frank Rich's column in the NY Times (Is Obama Punking Us?, August 9-Week in Review) and a column yesterday by Doug Saunders in the Globe and Mail (How Britain is falling down on the yob; August 8, World) made observations specifically reflecting on issues in the United States and in England, but their insights can also be applied to Mexico. (to punk is now a common English term roughly translated by "engañar" "gastar una broma" or "mala pasada"; a YOB is a term in the UK to describe a "gamberro"). The argument made by Frank Rich is that "average" Americans are increasingly disillusioned and reflecting a growing sense that "nothing changed" after the election of President Barack Obama. As Rich puts it:

"... this mood isn’t just about the banks, Public Enemy No. 1. What the Great Recession has crystallized is a larger syndrome that Obama tapped into during the campaign. It’s the sinking sensation that the American game is rigged — that, as the president typically put it a month after his inauguration, the system is in hock (empeñar) to “the interests of powerful lobbyists or the wealthiest few” who have “run Washington far too long.” He promised to smite them.

No president can do that alone, let alone in six months. To make Obama’s goal more quixotic, the ailment that he diagnosed is far bigger than Washington and often beyond politics’ domain. What disturbs Americans of all ideological persuasions is the fear that almost everything, not just government, is fixed or manipulated by some powerful hidden hand, from commercial transactions as trivial as the sales of prime concert tickets to cultural forces as pervasive as the news media."

Change a few of the referents in this description, and Rich's words perfectly capture the current mood in Mexico! "It's a sinking sensation that the MEXICAN game is rigged....the system is in hock to 'the interests of the SELF-SERVING POLITICIANS, TELEVISA, and CARTEL MONEY LAUNDERERS' who have 'run MEXICO far too long". And just as Frank Rich can provide specific examples of how this plays out in the United States, it does not take much effort to generate a long list of examples detailing the influence peddling, abuse of power, and outright corruption in Mexico. The Mexican middle class and the average 'José and Josefina' ARE disillusioned, mistrustful, cynical and know with certainty that a mean trick has been played on them once again; the shared jubilation following the election of Vicente Fox in 2000 has long disappeared and people are returning to the PRI-machine and willing to accept a new version of the "most perfect form of dictatorship" as it was termed by Mario Vargas Llosa. Doug Saunders is the Globe and Mail correspondent in London, and his column is a brilliant analysis examining the "permanent male underclass" that has euphemistically been labeled as NEET (Not in Employment, Education or Training) in the bureaucratic language of British policy makers. Saunders acknowledges that Britain and the UK always had a version of an underclass, but he reflects on why it periodically re-surfaces as a public issue and social problem. The current situation, he argues, is the result of Thatcherite policies that 'successfully' dragged the UK into the modern world with a neo-conservative framework that rewarded those most-suited and willing to change. And the UK did adapt relatively quickly, but unfortunately left a residue of an entire sub-class with NO access to emerging opportunities and with no alternative employment options. They were simply abandoned when programs were cut and replaced. The current generation of NEETs are experiencing the same situation faced by their parents — no skill, no job, and without a strong social support and safety net. The result is an inter-generational inheritance of poverty and anomie — and a permanent firewall around the new routes for mobility. Saunder's column is highly recommended, and the following quotes represent just a few of his observations:

A government report released last month showed that social mobility has declined: If you are born in poverty, your chances of making it into the middle class are lower than they were a generation ago. The NEETs, then, are more apt to be trapped, their children doomed to the same fate.....

“What we have is a group of people who've essentially got disconnected from the mainstream, who are completely cut off from labour-market activity, and that's been true for their parents and their grandparents,” says David Coats of the Work Foundation, a respected labour-market think tank in London. “And that's the real challenge.”

... the NEET phenomenon does seem to produce a distinctly unhappy and alienated sort of person, who is unlikely to feel motivated to change his lot in life or offer encouraging lessons to his children. A study by the Prince's Trust, a youth-oriented charity, found that 27 per cent of NEETs feel that life is meaningless, compared with 14 per cent of other young people. It is, if nothing else, a revolution of anomie.

The analysis offered by Saunders applies to Canada and to the United States, and could easily be extended to describe many of the reasons for the existence of a permanent underclasses of Aboriginal Canadians, Black and Latino Americans. But the broad terms of his analysis are especially applicable to Mexico and represent ideas that have never been applied systematically in looking at the root causes of narcoviolence in Mexico. The ideology of neo-conservativism and the NAFTA agreement came to dominate political and policy agenda at precisely the same time as "El Señor de los Cielos", the Sinaloa, Juaréz, Arellano-Felix, and Gulf cartels established their hegemony and became increasingly intermingled in global money markets. The major government patrón of free-trade ideology, Carlos Salinas de Gortari has never been exorcised from the Mexican political scene, and there is growing evidence that he still pulls strings. This week's version of Proceso (#1710) story has a photo of Salinas de Cortari on the cover and a feature story report entitled "El Padrino en Acción". As with Frank Rich's column, it's easy to extend Saunder's description of the English YOB phenomenon and offer a perfect description of what is happening to youth in Mexico —in many cases without even substituting terms or words;

If you are born in poverty, your chances of making it into the middle class are lower than they were a generation ago. The NEETs, then, are more apt to be trapped, their children doomed to the same fate.....“What we have is a group of people who've essentially got disconnected from the mainstream, who are completely cut off from labour-market activity, and that's been true for their parents and their grandparents...produce a distinctly unhappy and alienated sort of person, who is unlikely to feel motivated to change his lot in life or offer encouraging lessons to his children.

If anything, these words apply ten-fold to Mexico. Saunders refers directly to Mexico in his article when he writes comparatively about the hooligan/yob/NEET underclass:

They are known, in the deadening language of British bureaucracy, as NEETs – Not in Employment, Education or Training. Government figures say 16.6 per cent of Britons aged 18 to 24 are NEETs, a figure exceeded in the West only by Turkey, Mexico, Italy and Greece.

Any national differences between the three North American partners will be much larger than Saunder's article suggests: for example, the median age of a Canadian citizen is about 38 compared to a median age in Mexico below 26. Mexico is a country of young people, an extremely high proportion of whom have no jobs, have severe educational limitations as a result of the chronic government failure to support high school education and corruption in the Teachers Syndicates, and most of whom have recently have been blocked by the economic downturn from pursuing "opportunities" such as the "mojado" patterns offered to their parents. What choice do they have? Who are they? They are the casualties of drug wars! They're the drug-users in Mexico City and the Federal District, and they're the cannon-fodder in the waves of violence waged by "sicarios"! They are corpses hung from bridges and the headless bodies tossed on the roadsides and as warnings to competing cartels and to government troops— or perhaps just to demonstrate their viciousness! They're also the rural recruits making up the troops assigned to fight others who come from the same circumstances as they do. They are the ones left behind in the flawed economy managed by a government that is not respected, and they live according to a refran that daily lives are best thought of as "Mejor diez años como un güey que cincuenta como un büey"! Certainly, these global trends affecting all three countries — and Mexico more than the others— are worthy of discussion by the three amigos during their meetings in Guadalajara — the "silicon valley" of Mexico and one of the centres of the new economy and future.
Jim Creechan, August 9
PICTURE OF THE WEEK 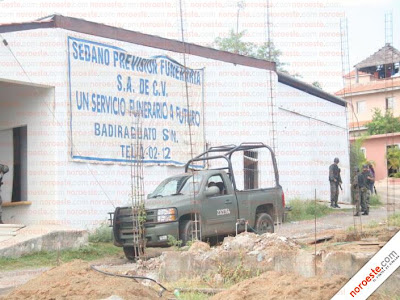 —. 2002. "The Field of Drug Trafficking in Mexico." Pp. 54—75 in Globalization, Drugs and Criminalization: Final Research Report on Brazil, China, India and Mexico, edited by UNESCO — MOST: UNESCO.

—. 2002. "The Social Construction of the Identify of the Trafficker." Pp. 52-72 in Globalization, Drugs and Criminalization: Final Research Report on Brazil, China, India and Mexico, edited by UNESCO — MOST: UNESCO.

Edberg, Mark Cameron. 2004. El narcotraficante : narcocorridos and the construction of a cultural persona on the U.S.-Mexico border. Austin: University of Texas Press.

Quinones, Sam. 2001. True tales from another Mexico : the Lynch Mob, the Popsicle Kings, Chalino, and the Bronx. Albuquerque: University of New Mexico Press.

Stratfor, and I. Strategic Forecasting. 2006. "Drug Cartels: The Growing Violence in Mexico." Pp. 8.

Some comments are available on SCRIBD.

There's a popular expression in Sinaloa — "Mejor vivir 10 años como un güey que vivir 40 años como un büey". It's better to live 10 years as a good old boy than 40 years as a donkey. Death comes early to those who enter the narcotraffic business, and they celebrate by building elaborate crypts for their remains. Architects and skilled artisans have been employed to build some of the most modern funereal designs seen anywhere in the world. How else will the world know you were a big shot? The link http://www.scribd.com/doc/15690361/Narco-Campo-Santo-Los-Jardines-del-Humaya-Culiacan opens a SCRIBD pdf file which is a slide show of images from the Cemetery of the Narcos in Culiacan. It is a large file with little comment. Also recommended is a view of Culiacan written by Magali Tercero and published in Letras Libres - "Culiacán, el lugar equivocado" por Magali Tercero
LETRASLIBRES.COM
©